There has been a recent unwelcome discovery in the dismantling of 3850 as part of her 10 year overhaul.  Her cylinder block has turned out to have a substantial crack, from top to bottom.
At the time of writing, it is not known whether or not the cylinder block is repairable, or if we need to get a new one cast.  Until we lift the boiler and can  remove the cylinder block, we won't be able to examine it properly and form an opinion.  Regardless, the overhaul of 3850 will not be cheap.   In order to meet the cost of the overhaul, including dealing with the crack in the cylinder block, Dinmore Manor Locomotive LTD has commenced a fund raising campaign, which will include Club 3850: 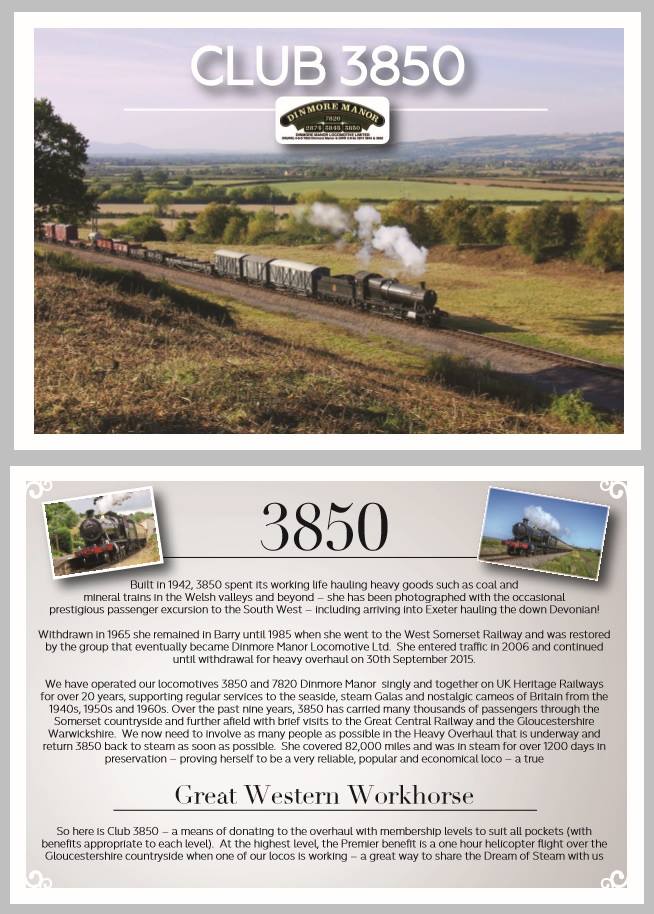 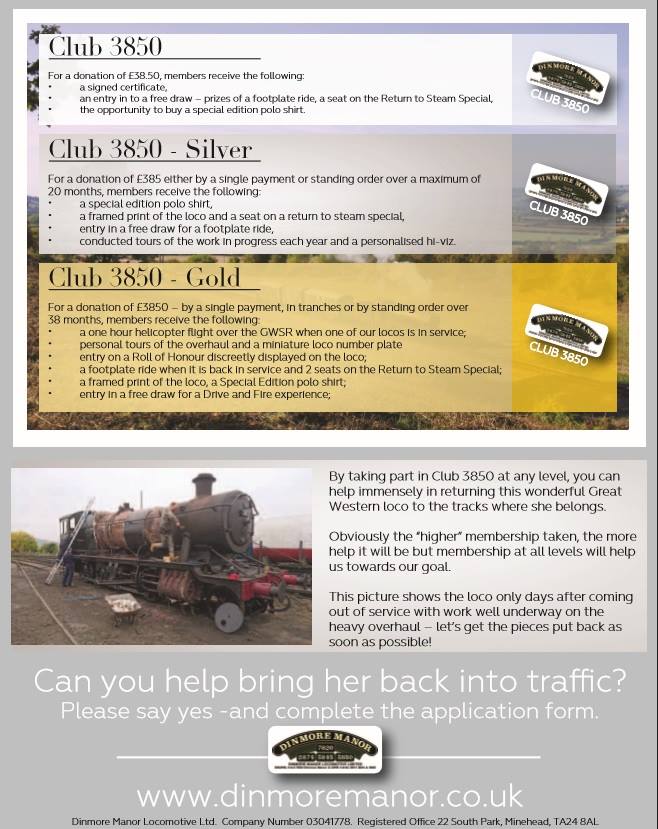 You will notice that Club 3850 includes for the Gold level members, amongst other enticements, a 1 hour helicopter flight over the GWSR following either Dinmore Manor, or when she is back in traffic, 3850.

The first Club 3850 member, Ian Shapter took his helicopter flight on Friday 11th March, I went along to record the event for posterity...  it's a tough job, but somebody has got to do it.


Should you be tempted to take the plunge and become a 3850 club gold member, an interesting idea might well be to book your helicopter flight on one of the days of the GWSR's "Cotswold Festival of Steam" gala on the late May bank holiday weekend (May 28th - 30th), when we will have up to 8 locomotives in steam, not just Dinmore Manor, but newly restored Bulleid Merchant Navy class, 35006, Peninsular and Oriental S.N. Co as well as 3 guest locos, including BR Standard 9F, 92214.

I can vouch first hand that the 1 hour flight is a truly memorable experience, certainly one that I won't forget in a hurry.
The most important bit of course is how can you help?  Joining DMLL as a working volunteer will always be welcome. Details of how to do that can be found by clicking here. For those who live further away from our restoration base at Toddington on the Gloucestershire Warwickshire Railway or don't have enough free time to commit, then joining Club 3850 at one of the three levels will help us to return 3850 back to working order.  Please download, print and send off this application form: 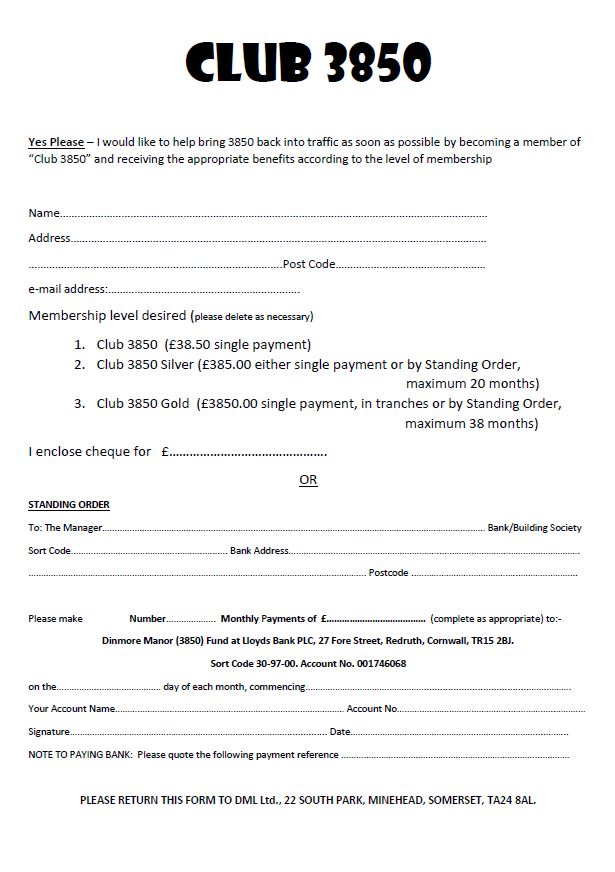 3850 on the Great Central Railway

The stripping down of 3850 at Toddington has had to take a back seat to the winter maintenance programme for 7820, Dinmore Manor.  Come the first weekend of March, Dinmore Manor will be back in traffic on the Gloucestershire Warwickshire Railway, and our attention will be able to return to 3850.   As a brief interlude, I have been sent some slides of 3850 during a visit to the Great Central Railway in January 2011, taken by Ian Wright, which he has kindly agreed to allow us to reproduce here.

This collection of slides provide a perfect illustration of 3850 at work in the preservation era, and Dinmore Manor Locomotive LTD would like to extend our thanks to Ian Wright for allowing us to reproduce these images here.  Hopefully it won't be too long before 3850 is back in steam again.
Posted by GWSR Steam Loco Dept at 22:25 No comments:

The Quest for the Next Ten Years Commences

Well that was a fun 10 years, but in order to put in any more time in steam, 3850 needs to have a major overhaul.  This will necessitate removing the boiler from the frames and refurbishing it to a standard that will allow it to obtain a further 10 year ticket.  Needless to say there will be plenty of other jobs that will need to be attended to at the same time.

This post will cover the significant progress made in dismantling 3850 at Toddington on the Gloucestershire Warwickshire Railway since she came out of traffic at the end of September.

After a scrub up with a pressure washer, the first job was to remove the injectors, which were sent away for refurbishment.
The next target was to prepare the boiler for lifting, in broad brushstrokes, that included removing the backhead fittings, clack valves and feed pipes, the boiler cladding, lifting the cab roof, disconnecting the steam pipes, and removing the boiler mounting bolts at the smoke box end and the expansion plates at the firebox end.
Simply removing bits is only half the battle, getting them cleaned, labelled, inspected and refurbished ready for refitting is vitally important.
Not strictly speaking a requirement for lifting the boiler, the superheater elements and header have been removed.  The tubes will also be removed before the boiler lift.
Ten years out in the seaside air has taken its toll, and a few fixings needed some gentle encouragement to undo:

Extracting the superheater elements required some superhuman manpower, a rope and something akin to a tug of war ensued.
It wasn't all hard work, Phil spotted a souvenir that he thought would look good on his living room wall.  Never fear, he didn't get far with it.